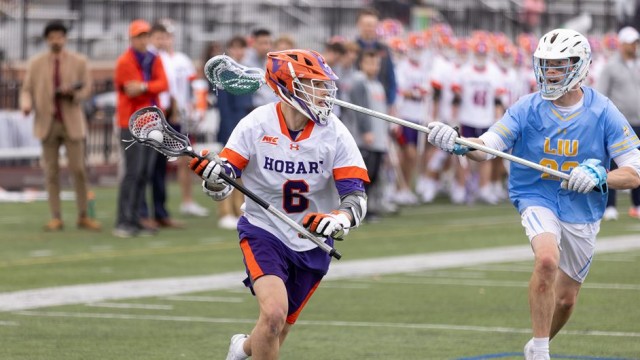 GENEVA, N.Y.—Hobart College attackman Ryan Archer broke the program's Division I era career assists record as the Statesmen picked up an important Northeast Conference win over Long Island University 22-19. Hobart earned its third straight win to improve to 5-5 overall, 3-3 in the NEC. The Sharks slip to 6-7, 3-3. Archer shared game-high honors with a career-high nine points, including a career-high matching six assists. It raised his career total to 95, surpassing the standard established by Chris Aslanian '19 (94). Overall, Archer is seventh in career assists, four behind No. 6 Jeff Tambroni '92. Archer's team-leading 31 assists this season are third on Hobart's Division I era season assist. Attackman Derrek Madonna finished the game with a career-high eight points, including a team- and career-high six goals. Midfielder Anthony Dattellas also produced career-highs in goals and points, finishing with five goals and six points. Midfielder Adam Shea was 24-of-41 on faceoffs, establishing a new career-high for faceoff wins in a game. In fact, in the program's DI era, only two players have won more faceoffs in a game. Shea also scooped up a career-high matching 14 ground balls and logged a career-high two assists. LIU had four players finish with six or more points, led by attackman Richie Lacalandra nine points on three goals and six assists. Attackmen Blake Behlen (4g 4a) and 4/25/22, 2:24 PM Archer breaks assists mark, Statesmen swamp Sharks - Hobart and William Smith College Athletics https://hwsathletics.com/news/2022/4/23/hobart-lacrosse-archer-breaks-assists-mark-statesmen-swamp-sharks.aspx?print=true 2/2 Sean Boll (8g) both posted eight points. Thomas von Barge notched two goals and four assists. Midfielder Justin Joseph was 16-of-41 at the X, grabbing a team-high 11 ground balls. Hobart fired home three goals in under a minute to open the day's scoring, but LIU scored four of the next five goals to knot the game at 4-all by the end of the first quarter. The second quarter was loaded with goals. In fact, LIU's 9-7 scoring edge in the frame outscored the final score of the Merrimack-Wagner game (8-6 Warriors). The Statesmen and Sharks were tied at 8 with 6:30 left in the first half, but LIU scored five of the final eight goals to a 13-11 lead into the break. Boll had a game-high four goals in the first half, while Lacalandra had a game-high eight points. In a game that featured 41 goals it may seem odd to talk about the defense, but Hobart's D stepped up in the third quarter, limiting the Sharks to just a single goal and that proved to be the difference in the game. Goalie Kevin Holtby made four of his 11 saves in the game in the third quarter. Meanwhile, at the other end of the field, Archer set up Madonna and then scored an unassisted goal to tie the game. Boll buried a pass from Behlen to give the Sharks the lead for the final time at 14-13. It would be more than 18 minutes before the visitors would score again, while the Statesmen used an eight-goal run to build a 21-14 lead. Madonna and Dattellas both scored three times during the burst. LIU kept things interesting with five straight goals, including three from Boll, late in the fourth quarter to make it a 21-19 game with 2:23 remaining, but Chad Bach scored on an empty net with 1:37 left. Shea won the ensuing faceoff and Hobart ran out the clock. The win moves Hobart into a tie for third place in the NEC standings with LIU with one game remaining. The Statesmen will host Mount St. Mary's (5-9, 2-4) April 30. Hobart can secure the No. 3 seed in the four-team NEC Tournament with a win over the Mountaineers. If the Statesmen lose, they fall back into a tie for fourth place with Mount St. Mary's (and possibly Sacred Heart if the Pioneers beat Saint Joseph's. The Hawks lead SHU 7-5 early in the third quarter). In that scenario, Hobart would miss the playoffs due to the head-to-head tiebreaker.