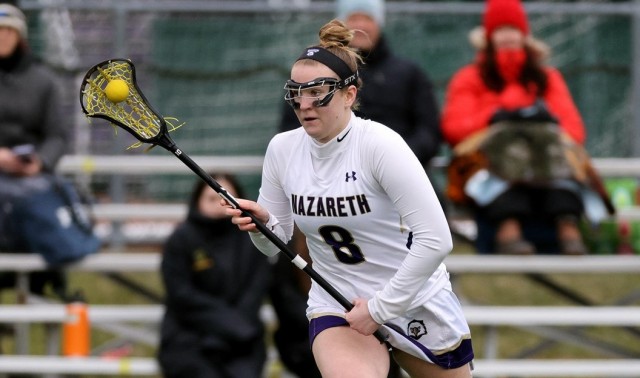 Congrats to OC '18 Alum Emma Parry - she was named to @IWLCA Senior All-Star Team and competed in the Division III North-South game this past Sunday!
ROCHESTER, N.Y. -- Honors continue to roll in for Emma Parry, a senior defender on the Golden Flyers' women's lacrosse team. Parry was named to the 2022 senior all-star team and will compete Sunday in the Division III North-South all-star game. The all-star games will be played on Tierney Field at USA Lacrosse Headquarters in Sparks, Md. The Division III game will be played at 11 a.m., followed by the Division I game at 12:45 p.m. and the Division II game at 2:30 p.m. Admission for all three games is free. Parry will play for the Division III North squad that will be coached by Jill Muston of York (Pa.) College. Earlier in the off-season, Parry was named as a third-team All-American by the Intercollegiate Women's Lacrosse Coaches Association and was named as Empire 8 Conference Defensive Player of the Year. In 2022, Parry had one goal and two assists and set single-season Nazareth records with 95 draw controls and 45 caused turnovers. She also led the team with 55 ground balls.
https://nazathletics.com/news/2022/6/1/womens-lacrosse-parry-named-to-senior-all-star-team.aspx
External links are provided for reference purposes.Orange Crush Lacrosse is not responsible for the content of external Internet sites.
CopyrightOrange Crush Lacrosse All rights Reserved. Privacy Notice
Sports League Management Software bySportsSignUp Play